In the autumn of 2015, we received a lot of questions from the population of Magadan about where to take the used batteries for their further utilization. Especially a lot of those who turned to children. But the points of reception of wastes of this kind in Magadan were not established.

Within the framework of the project, in the shopping centers and schools, there were equipped battery reception points, where anyone could return the used batteries.

Our point of reception of used batteries is not the final point of their movement towards disposal. Further we will ensure their transportation to the processing point. There they are sorted, dismantled, divided into components. Metals and toxic components are processed separately. Battery recycling is a process to restore and operate the materials from which the batteries are made. During this process, useful components are extracted from the batteries, which are then recycled to the new products.

The exclusive goal of this program is that, for the first time in Magadan, the batteries will be processed appropriately into secondary raw materials, which will again serve the people. The raw materials obtained after processing will be used to manufacture new batteries, or can be used in other industries. Such treatment of batteries will certainly lead to an improvement of the environmental situation in Magadan. The goal of this process is the preservation of electricity, raw materials and the environment. 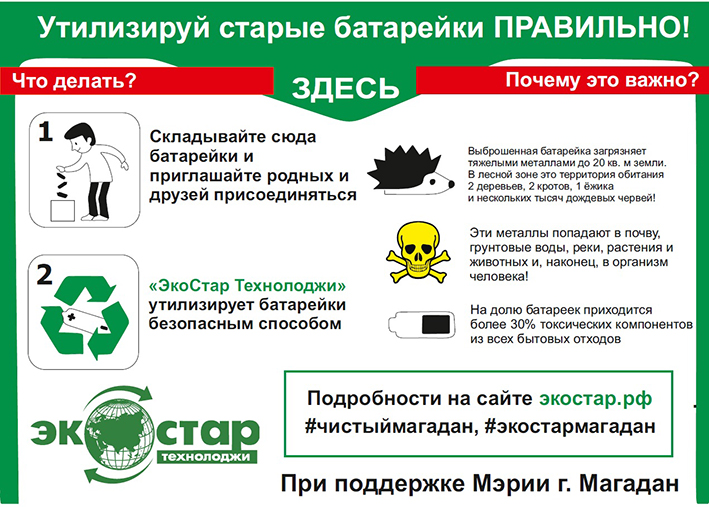 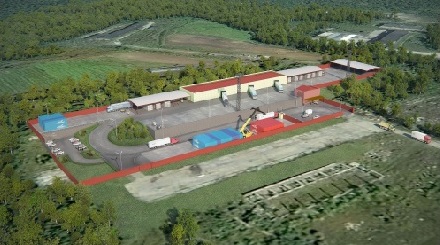 In the framework of the first Eastern Economic Forum, the topic of safe environmental living conditions in the Far Eastern region was raised more than once. During the WEF 2015, then the first deputy mayor of the city of Magadan, Yuri Grishan, visited the plant for the processing of industrial waste "EcoStar Technology" in Artem, Primorye.

The idea to create such a production on the Kolyma led to a proposal for cooperation the Mayoralty of Magadan with EcoStar Technologies LLC, one of the leading processing companies in the Far East. And in the spring of 2016, within the framework of the Forum "Vector of Development of Magadan 2020", at which the main directions of development of the city and the region until 2020 were outlined, we concluded a cooperation agreement with the Mayor of Magadan.

Within the framework of this agreement, it is planned construction of a complex for recycling industrial waste in the territory of Magadan , which will create a safe ecological conditions in the Magadan region, as well as to receive useful goods from recyclables, create additional jobs.

Initially, it is planned to launch a line for processing used tires in rubber crumb, which is later used for the installation of trauma-resistant rubber coatings at sports and children's playgrounds, as well as near-home areas. Production facilities of the plant will not be limited to the processing of old tires. In the future, the plant will process old batteries, used electronics, mercury lamps, etc.